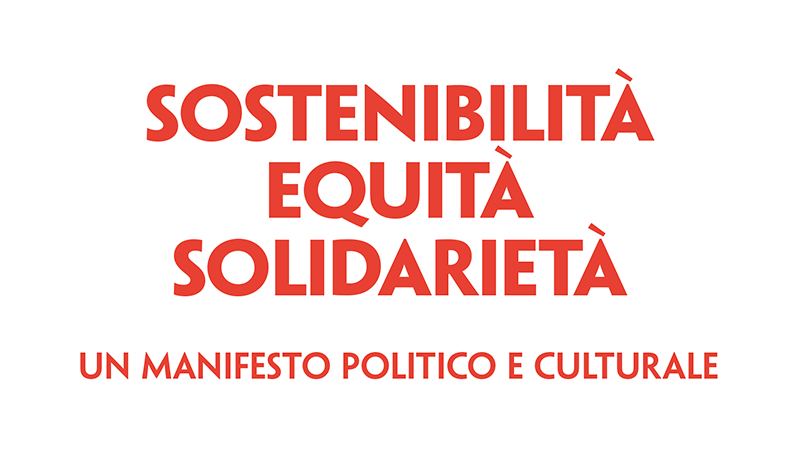 We are very worried about the seriousness of the ecological crisis:

– Greenhouse effect gas (carbon dioxide and methane) have exceeded the biosphere’s capacity absorption, triggering climate changes of which we have just begun to suffer the consequences;

– The consumption of renewable resources has exceeded the annual regeneration of the biosphere’s capacity: the overshoot day, the day when humanity reaches the point of consuming the renewable resources that the planet regenerates in a year, fell in 1980 under the December 31st threshold, in 2000 September 30th, in 2016 August 8th, in 2018 August the 1st

– The consumption of non renewable resources (in particular fossil fuel and some metals) has drastically reduced the stocks triggering wars to take over residual deposits;- The emissions of chemical synthesis substances that cannot be metabolized by the biosphere generate increasing widespread forms of  pollution: masses of plastic pulp the size of the United States are floating in all oceans, the quantities of underground and burned waste are increasing, the incidence of deadly diseases caused by synthetic toxic substances used in industrial processes and agriculture is increasing;

– The fertility of agricultural soils and the biodiversity have been drastically reduced, fish populations are halved

We are also very concerned by the increasing disparity in people’s life opportunities:- The concentration of money and wealth in the hands of few continues to grow relentlessly, leading to increasingly accentuated inequalities between the North and the South of the world, between rich and poor, between men and women;- The number of people suffering from hunger and/or chronic malnutrition has exceeded 800 million;Wars, poverty, human rights systematically violated and climate changes make a barely dignified life practically impossible for an ever-increasing number of human beings in their places of birth.

We are convinced that environmental, social and economic imbalances of the planet have a common matrix: that of industrialist and productivist models supported by all the parties – left,  right and self-styled post ideological. Their economic, industrial and agricultural policy proposals are aimed at reviving the growth of the gross domestic product, without succeeding despite their commitment. And if they were to succeed, this would lead to an aggravation of all the factors of the environmental crisis, which is not taken into consideration despite having taken on macroscopic dimensions.
We are incredulous because of the absence of these problems from the programs of all the existing political forces, which at most consider them the consequences of illegal behavior to be repressed: a commendable commitment, but absolutely inadequate in relation to the causes, dimensions and measures necessary to mitigate them.
We are aware of the fact that humanity is in the most difficult passage of its history, from which it can be annihilated, or by starting a new historical phase. A phase that to be more evolved must be characterized by the preservation of the progress made over the last three centuries and by the overcoming of the negative factors which were caused by the shift in the finalization of the economy, from the improvement of the living conditions of human beings to the growth of  production of commodities. This shift, which is based on the greed of present generations, actually harms them, damages non-human beings and will harm future generations.
We are convinced that only a profound cultural revolution, founded on the overcoming of anthropocentrism and the revaluation of spirituality, will allow us to open a more evolved historical phase.

We are convinced that the overcoming of anthropocentrism can be pursued by redirecting the aim of  technological innovations from the increase in productivity to the increase in the efficiency of the process of transformation of natural resources into goods. This will significantly reduce the environmental impact of production processes and products.
We are convinced that in this current historical phase only these technologies will allow an increase in employment and connote it qualitatively, as useful occupation, and to pay its cost with cost saving consequent to reduction in resources consumption per unit of product, without therefore increasing debts and to download charges neither on the future generations, nor on non human beings.
We are convinced that it’s necessary to unmask the big deception of sustainable development, because behind this formula, which proposes a growth obtained by lower impact technologies, the advantages of the reduction of the environmental impact per unit of product are canceled by the output growth and the self-destructive trend in place is simply slowed down.
We are convinced that need to re-evaluate spirituality to overcome the flattering of human beings on the materialistic side, on the greed, on the consumerism, on the individualism and interpersonal competitions, which were stimulated because they are essential to keep the demand high in order to absorb the increase of supply of commodities.

We are convinced that need to overcome the confusion between the market – which is the more advantageous way both for sellers and buyers to trade – and the market economy – which defines the current economic system in which the economy is aimed exclusively towards the production of commodities, the self-production and the exchanges based on the gift and reciprocity are boycotted, money from medium of exchange of the commodities became the purpose of life of human beings
Considering that the percentage of voters exercising their right progressively decreases, while the number of blank ballots and null cards increases, and that the most recent polls indicate that about a third of the electorate either is oriented not to vote, or does not know who to vote for
we propose to those who

– do not recognize themselves in the policies implemented by the existing parties,

– use, or produce, or install ecological technologies,

– participate in environmental and social commitment groups in the place where their live,

And understand it is not enough to apply these choices in their lives, but that it is necessary to contribute so that they also guide political decisions,

– to send a formal adhesion to this call to the following address: appello.sequs@gmail.com

– to commit, together with the promoters of this call, to verify the possibility of constituting a political subject that does not have the immediate objective of participating in the elections, but above all is not another party because it is unlike the existing ones:- we place at the center of our program the ecological reconversion of the economy and the economic reconversion of ecology, in the conviction that the economic crisis can only be overcome with an industrial policy aimed at overcoming the ecological crisis and the ecological crisis can only be overcome if this objective is not limited to the ethical sphere, but becomes the priority of economic and industrial policy;

– we do not want a centralized structure, but a federative one; we do not want to have a strictly defined political line at national level, but we want to valorize the diversities as a wealth, limiting ourselves to not accepting positions opposed to those expressed in the basic principles outlined in this call.